Apologies to readers of my blog who care only about my writings on technology and entrepreneurship, but I was compelled to write a more personal post in honor of the 50th anniversary of LBJ's signing of the historic Civil Rights Act (a law some argue was "the single most important US law in the 20th century").

In celebration of the anniversary, we took the opportunity this week to take a family trip to Alabama, Mississippi and Tennessee to expose our kids to this poignant history.  The things we saw, the people we met, the conversations we had as a family inspired me tremendously.  I am sharing a few highlights in the event that anyone else is interested in exploring this part of the country and this influential chapter in American history.  By the way, if you haven't seen it yet, I highly recommend All the Way, the powerful play starring Bryan Cranston about LBJ's first year in office and his amazing efforts to pass the Civil Rights Act.

After flying into New Orleans (and, yes, having some fun there), we started our trip at Beauvoir in Biloxi, Mississippi – the retirement home of Jefferson Davis after the end of the Civil War.  It was a fitting place to start:  the Union won the war and the slaves were declared free, but the impact from centuries of discrimination and segregation remained.  Below is one of the t-shirts they sell at the gift shop there, which spurred a vigorous discussion with my kids about why the Confederate flag is indeed so offensive and why there is such powerful controversy surrounding it.

We then drove to Montgomery, Alabama where MLK did so much of his good work.  Montgomery is a pretty barren city, but the sites are amazing and many are quite new.  The Rosa Parks Museum, located precisely at the bus stop where she got on and sat in the middle "white section", is an absolute gem.  The kids were mesmerized by the exhibits that provided a visual reinactment of her quiet courage in standing up to years of injustice.  It was particularly powerful to stand in front of the state house where Governor George Wallace was sworn in (102 years after Jefferson Davis was sworn in as President of the Confederate States at the very same spot) and declared in 1963 "segregation now, segregation tomorrow, segregation forever".  Right across the street is the Dexter Avenue Baptist church where MLK pastored for seven years.  Around the corner is the Southern Povery Law Center, which had a beautiful exhibit about fighting for social justice, culminating in one of my favorite Eli Wiesel quotes, which my son captured below.  In reward for its good work, the SPLC staff shared with us that they have received 30 bomb threats in the last 20 years. 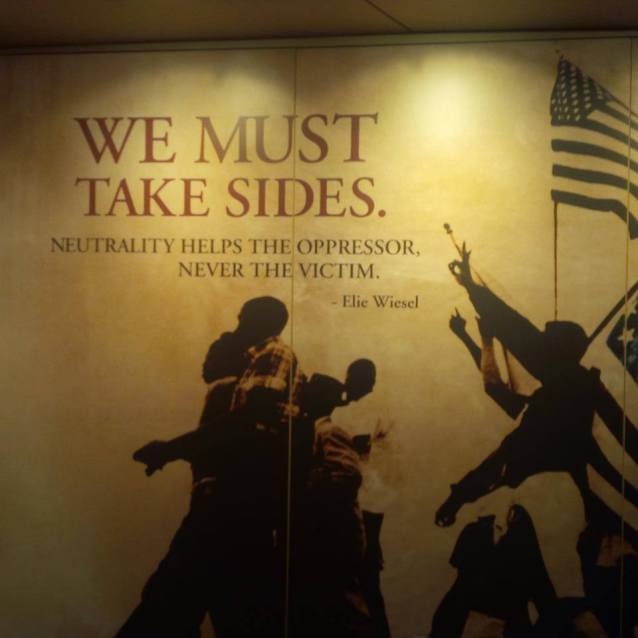 From Montgomery, we drove to Selma to walk across the Edmund Pettus Bridge, where MLK and other leaders crossed to kick off a 5-day, 54 mile march from Selma to Montgomery.  The march occurred in March 1965 – nearly a year after the passing of the Civil Rights Act but at a time when voting discrimination remained rampant.  The march resulted in LBJ submitting (and eventually passing through Congress) the Voting Right Act only a few days later.  Here is a moving excerpt from his speech to a joint Congress:

Even if we pass this bill, the battle will not be over. What happened in Selma is part of a far larger movement which reaches into every section and state of America. It is the effort of American Negroes to secure for themselves the full blessings of American life. Their cause must be our cause, too, because it is not just Negroes but really it is all of us who must overcome the crippling legacy of bigotry and injustice. And we shall overcome.

After Selma, we drove to Birmingham, Alabama and had the privilege of attending the Sunday Easter service at the famous 16th Street Baptist Church.  Over 200 parishoners were there to celebrate the holiday and we enjoyed meeting many of them and participating in the service.  One 81 year old man shared with us his personal connection the four young girls who were killed in the 1963 bombing at the Church.  This bombing contributed to the national outrage that led to the passing of the Civil Rights Act.

We then drove to Oxford, Mississippi to visit Ole Miss.  Ole Miss was finally integrated in 1962, thanks to the courage of James Meredith and with the support of 500 US Marshalls that JFK had to send to force the issue with the intransigent Mississippi governor.  There is a statue of Meredith on the campus and a beautiful tribute to him.  Shockingly, his statue was found just a few months ago with a noose around it and wrapped in a Conferederate battle flag.

Finally, we drove to Memphis and visited the Lorraine Hotel where MLK was tragically assassinated.  The hotel has been converted into a comprehensive, newly renovated National Civil Rights Museum, with exhibits that track the history of slavery through emancipation through the 1960s all the way up to today's civil rights issues.  I was particularly pleased to see the focus on some of the modern civil rights causes, such as immigration reform.  I was also touched by a video about a non-profit called Black Girls Code, which I'm looking forward to learning more about.

The trip was overwhelming and moving.  It prompted conversations with our kids about the modern issues of income inequality.  For example, my 17 year old daughter asked me at one point:  "Why do certain jobs pay more than others?" which led to a rich discussion about income, justice and the free market.  It raised conversations about bigotry in our community in our time, not just historical acts of bigotry, and it expanded their horizons in a way I had not anticipated.

If anyone wants to get advice about taking a trip like this, let me know.  One of our favorite non-profits, Facing History and Ourselves, was a great resource for us as they led a similar trip for their board in 2001.  We loved being exposed to Southern Hospitality (everyone we met was very kind and welcoming), learning about our history, celebrating how far we have come in 50 short years and recognizing that we have more work to do in the years ahead.

That is why I have been so frustrated with our country's backward immigration system.  For me, as the son of an immigrant entrepreneur, it is a combination of a social justice issue and an economic pragmatism that has led me to be so passionate and engaged in reforming our broken system.

In the last few months, as I watched Washington DC fumble around with a comprehensive immigration reform bill (passed in the Senate, floudering in the House), I began to wonder if something might be done on a local, state level to address this issue.  Massachusetts has a pro-business Governor and Legislature, an Innovation-heavy economy, and a history of successful public-private partnerships.  Surely we could figure something out while we wait for the Washington politicians to go through their machinations?

Thanks to the help of a few talented immigration lawyers – Jeff Goldman and Susan Cohen – and a dedicated group of public servants – led by Greg Bialecki and Pamela Goldberg – an idea emerged to address this issue head on in an innovative way that is consistent with the federal rules and regulations, but allows the state to attract and retain international entrepreneurs.

The idea is a simple one:  create a private-public partnership to allow international entrepreneurs to come to Boston and be exempt from the restrictive H-1B visa cap.  How is it possible to do this?  The US Citizenship and Immigration Services Department (USCIS) has a provision that allows universities to have an exemption to the H-1B visa cap.  Governor Deval Patrick announced today that the Commonwealth of Massachusetts will work in partnership with UMass to sponsor international entrepreneurs to be exempt from that cap, funding the program with state money to kick start what we anticipate will be a wave of private sector support.

This innovative program has tremendous potential.  For Massachusetts, it means we are sending a message to entrepreneurs around the globe that we want them to come here to start and scale companies.  For other states, it is a model that can be replicated if local leaders from the private and public sector can come together and cooperate to work out the details to launch and operate this program, as we have done over the last few months.

This year will be a pilot year (with a nod to the Lean Start Up!) and I'm sure we will learn a lot along the way, but I am super excited about the potential that this program presents for the state and the country as a whole.

For the last few years, many leaders in the Massachusetts innovation community have been arguing that non-compete agreements should be eliminated.  Article after article has been written in support of putting this policy forward to increase the dynamism of our ecosystem and send a message to the broader innovation community that Massachusetts is a great place to start and develop your career.

Many studies have shown that non-compete agreements reduce R&D investment and stifle innovation.  MIT Professor Matt Marx conducted a seminal study in Michigan that showed that the enforcement of non-competes caused a sharp drop in mobility for inventors, thereby slowing innovation and economic dynamism.  Professor Mark Garmaise of UCLA published a study which had similar findings and, further, assessed the state by state use of non-competes, concluding that Massachusetts had one of the strictest in the nation (see chart below from Highland's Paul Maeder, putting states on a 0-9 enforceability index scale).

Today, Governor Deval Patrick is officially proposing to change all that by putting forward legislation that will eliminate non-competes outright.  If passed, this has the potential to eliminate a huge barrier to the free flow of talent to the best opportunities, thereby creating a more dynamic entrepreneurial environment in the state.

I give tremendous credit to Spark Capital's Bijan Sabet, who first raised this issue seven years ago.  Many legislators and leaders got behind the effort, but no one has been able to galivinize enough support to convince the governor to lead here.  Greg Bialecki and Jennifer Lawrence have made that happen and the tech community will be forever grateful if the legislature will embrace this effort, even if in the face of big company opposition.

House Speaker Robert DeLeo has been a champion for the innovation economy for years, kicked off by his (somewhat cheeky) open letter to Mark Zuckerburg to urge him to open a Facebook office in Massachusetts.  Let's hope he's willing to support legislation that makes it easier for the next Mark Zuckerburg to leave his or her job to start the next Facebook…without the fear of old-school shackles and reprisals.