A few years ago, I did an analysis on the Boston-based companies that were worth more than $500 million in value, which I called Boston Unicorns. One of the (somewhat depressing) conclusions I made at the time was "there have been no multi-billion dollar valued tech companies founded in Boston in the last 13 years."

With the news that Hubspot has hit $2 billion in market capitalization, I figured it was time to update the analysis. Happily, I found a more encouraging picture, both in terms of the performance of some of the Boston-based public companies and the pipeline of candidates that might elevate into this level of extraordinary value creation.

I felt compelled to move away from the oft-used unicorn label and I really just wanted to focus on multi-billion dollar companies because these represent the future anchor companies that Boston so desperately needs, as identified by this recent MIT study on Growing Innovative Companies to Scale that I participated in. Because it is the holiday season, and because I was able to find nine of them, I'll coin a new label:  Reindeer (pop quiz for my readers: can you name all nine of Santa's reindeer? I'm Jewish, so I confess that I had to look that one up). By my definition, Reindeer are tech companies founded since 2000 that have created more than $2 billion in market value. They're mythical creatures, just like unicorns, but very special when found.

To get a sense of the future anchor companies in the Boston region, let's first look at the public companies. Two years ago, I pointed out that there were only three companies that had achieved > $1 billion in value in the tech sector founded since 2000 (i.e., excluding life science companies). Happily, there are now five companies founded since 2000 that have achieved > $2 billion in value and another four founded since 1990. Those companies can be seen in the chart below (complete with Christmas colors that would make Starbucks proud), reading left to right in terms of total market capitalization:  Demandware, Fleetmatics, Hubspot, Vistaprint, Wayfair, athenahealth, Nuance, Akamai and the new king of the Boston tech scene (with EMC's demise), TripAdvisor. 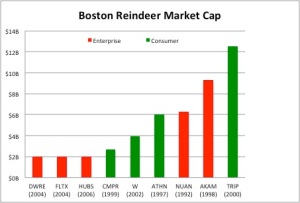 Contrary to popular myth, big business to consumer (B2C) companies can be created in Boston as four of the nine Reindeers are B2C. It is also encouraging to note that 2015 was a pretty good performance year for these companies. Seven of the nine companies saw price gains (as of 12/15) ranging from 6% (athenahealth) to 134% (Wayfair). Only two of the nine companies saw their value decrease: Demandware (11% decline) and Akamai (18% decline). Pretty good performance as a whole compared to other tech stocks that have gotten pretty beat up (e.g., Yelp is down 49% YTD, Box is down 41%, Hortonworks is down 24%).

The next piece of analysis is to look at the high-flying private companies and examine the pipeline of companies that could become reindeer in the coming few years.

In order to do this, I used data from my friends at Mattermark (my firm, Flybridge, is an investor) to look at all the companies that have raised over $25 million in total capital in the last 10 years and whose last round was greater than $10 million (thereby filtering out down rounds/sideways situations). I was pleased to find a robust 99 companies that met those criteria in Boston. Of those 99 future reindeer candidates, 53 are from the tech sector, including 11 companies that have raised over $100 million in private capital: 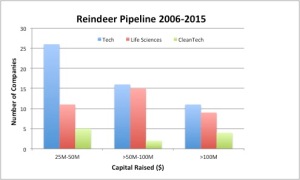 Of those 11 companies, only one is a B2C company: DraftKings. The others are all B2B, including a few perennial IPO watch list companies who are believed to be unicorns (i.e., private valuations > $1 billion) like Acquia, Actifio, Affirmed, Veracode and Simplivity. Amazingly, three tech companies who have raised > $100 million were founded since 2011: the stealthy Altiostar Networks, DraftKings and OnShape.

The conclusion of this analysis:  the Boston ecosystem is looking pretty robust, with nine solid anchor tech companies who seem to be performing well and over 50 private companies that have a shot at becoming future anchor companies in the years ahead.  So keep your eyes on the skies this Christmas Eve and you may see a few Boston reindeer overhead (meanwhile, I'll be at the movies and eating Chinese Food).

Thanks to Nicholas Shanman for his help with this analysis.